There are several specialized mobile gaming brands, but two of the best known are Black Shark and Nubia. Black Shark recently unveiled its Black Shark 3 and 3 Pro and now it is Nubia that returns to the fray with the Nubia Red Magic 5G. It is a high-end device that seeks to attack the niche of gamers with three weapons: screen, processor, and cooling.

The Nubia Red Magic 5G, which is 5G, as its name indicates, comes with up to 12 GB of RAM, the Snapdragon 865 processor, a screen of 6, 65 inches with a 144Hz refresh rate and a physical fan inside to reduce the temperature. At the moment it has been presented in China and internationally it will be launched in April 2020. Its price starts from 484 euros in exchange.

We start by reviewing the aesthetic section, where Nubia preserves those aggressive design lines marked by straight lines of colors on the back. It is a relatively heavy terminal, 218 grams, and on its right side, we find two touch triggers. It is, in that sense, similar to the Black Shark 3 Pro, only the triggers don’t stick out. These have a sampling rate of 300 Hz, which on paper should translate into a good response speed. Let’s talk about the refresh rate. we are used to seeing mobile phones with 90 Hz and even 120 Hz, but Nubia has gone up one notch and has increased the refresh rate to 144 Hz, that is, it refreshes 144 times per second. It is, to put it in context, more than double that of conventional mobiles. The sampling rate, they claim from the brand, is 240 Hz.

As for the screen itself, we have a 6.65-inch AMOLED panel with 19.5: 9 format and FullHD + resolution (2,340 x 1,080 pixels) certified by TÜV Rheinland. There is no hole in the screen, no notch or pop-up system, but the internal camera has been placed in a small frame in the upper area. Needless to say, the fingerprint reader is under the screen.

Thus we come to talk about the motor, where the terminal is not exactly short either. The device comes with eight or 12 GB of LPDDR5 RAM and up to 256 GB of internal UFS 3.0 storage. The processor is the Snapdragon 865, so it is obviously compatible with 5G SA and NSA networks. What is striking is not this, but its cooling system.

And it is that inside the device there is a small fan at 15,000 RPM that weighs one gram and that, according to Nubia, is capable of reducing the CPU temperature up to 18 degrees. They affirm, in turn, that it has a useful life of 30,000 hours, which amounts to 3.4 years or 27 years playing three hours a day.

In addition to this system, there is added a liquid cooling system and a kind of wind tunnel that allows air to enter on one side and exit on the other, taking the heat with it. They claim that the system measures 4,000 mm2 and that it increases ventilation by 30%. Again, better wait.

All this is brought to life by Android 10 with the Nubia customization layer, which applies some image enhancement algorithms and an optimization suite for games, as well as a 4,500 mAh battery with 55W fast charge. In terms of connectivity, 5G, 4G, WiFi 6, Dual GPS and dual SIM. There is no mention of NFC.

On the back, the device mounts three sensors, the main one being a 64-megapixel Sony IMX686. Accompanied by an eight-megapixel wide-angle and a two-megapixel macro camera. The selfies are in charge of a single eight-megapixel camera. 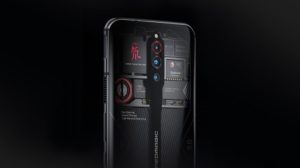 Versions and price of the Nubia Red Magic 5G.

The Nubia Red Magic will be available in red/blue, black, red and transparent, a finish that allows you to see inside the terminal. The price varies depending on the color and the capacity of RAM and storage. The terminal can already be booked in China and its arrival in the international market is scheduled for April. The thing is as follows:

The European Space Agency delays its mission to Mars until 2022